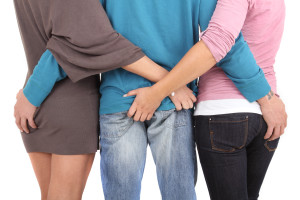 There’s a terrible secret that most jealous people live with that people who aren’t jealous are probably not aware of.

If you’re jealous, the secret that you try to keep from others is that most of your thoughts (depending on the circumstances and severity of your jealousy) are worry and downright fear that you will lose the love you have.

You find yourself acting and responding from that place of fear much of the time and you don’t know how to stop doing it.

Do you ever get a song stuck in your head that plays over and over?

It might be a popular song on the radio, a song you play repeatedly on your IPod or even a commercial jingle.

Whatever it is, you usually can’t get rid of it until you exorcise it by listening to another song or in some cases actually listening to a recording of the song that’s been driving you crazy–or you get focused on something else.

While there’s nothing wrong with them, it can get annoying to have the same song playing over and over in your mind until you do something about it to change your focus.

An ear worm doesn’t have to be a song.

It can be something that someone says to you–usually it’s something critical that you’ve taken in and repeated over and over to yourself until you believe it.

For example, someone might make an off-handed remark about your hair and it stays with you all that day and can even run your life for years!

A jealousy ear worm is a jealous thought or worst-case scenario that is replayed in your thoughts many times, even over the span of years.

Unlike regular “song” ear worms, these jealousy ones don’t leave on their own–unless you take some action.

These jealousy ear worms are similar to the ones we get going when we hear a critical remark and take it in.

They just keep coming up in our thoughts.

When you’re struggling with jealousy, most of what “plays” in your mind is fear that you’re going to lose what you have or what could have been.

“From the very beginning of our marriage my husband enjoyed paying a lot of attention to other women. I didn’t like it but I could live with it until almost twenty years ago when a woman who become my best friend came into our lives.

“She and I walked together in the mornings. While we walked, she enjoyed telling me stories about men being attracted to her and their wives being jealous. I sided with her that she couldn’t help it that she was so cute and charismatic until I started noticing that my husband was paying more and more attention to her.

“You can imagine my relief when she moved to the other end of the state a little over five years ago.

“My husband has not changed. He still enjoys admiring and giving other women attention, but now I go berserk and would rather just stay home than put myself through the emotional upset that I experience in social settings.”

What’s really clear from “Carol’s” story is that for the last five years, she’s had an ear worm that says that her husband will leave her for someone else, she isn’t good enough and she’s jealous.

The only thing that’s changed from before she became friends with this woman is what she tells herself.

Her husband hadn’t changed but Carol had–and not in a good way.

(Of course her husband COULD change by stop noticing other women but the fact is, he hasn’t. And if she wants things to change, she needs to do some things differently.)

After all, as we think about her, how could she have NOT changed?

They were best friends and they spent a lot of time together.

You’ve probably noticed things like this that have happened in your life.

You become friends with someone, start spending more time with them and before you know it, they’ve really made a big impact on you.

You’ve been influenced by this person in a lot of different areas of your life.

When these changes take place in ways we consider to be good, it’s no problem.

However, when they have a more negative impact on us, sometimes we don’t realize it until it’s almost too late.

That’s what happened in Carol’s case….

Whether it’s your relationships, the music you listen to, the food you eat or the beliefs you have…

One BIG reason why we think the way we think and believe what we believe is what we absorb from the people in our lives.

Because Carol had bought into what her friend had continued to tell her about herself and how powerless men were in the face of an attractive woman like her, it caused major problems in her marriage.

None of the things Carol’s friend said were necessarily true but she created a story or a “jealousy ear worm” that told her they were true.

But Carol didn’t let her jealousy ear worm stop her from having the kind of relationship she really wanted….

She ordered our No More Jealousy course and worked through it, practicing the steps to stopping jealousy.

“I was so frozen in fear when jealousy feelings came that I couldn’t think. I could only react. Low and behold in what I heard in the CDs and read in the book–
lots of people react when those emotions come exactly as I did.

“I became quiet and numb and withdrew just to lash out in anger at home. I appreciated the explanation that all of these behaviors are ways to shield, protect
and insulate from the pain that is being felt inside……and I know that it is true that I was putting up walls and distance was being created to self-protect and feel like I had some control in the situation.

“In listening and reading, it seemed strange to be looking on the outside of a situation that I had been in over and over again but had no idea what was really going on and where I was coming from because I was so frozen in fear that I could not think.

“The most important statement that I read yesterday was ‘Understanding this behavior and what is underneath it are the beginning
steps to healing it’.

“Thank you so much for the ‘No More Jealousy Course.”

Carol told us that she is now focusing on what is right with her husband and with her relationship rather than what is wrong.

She said that she had been holding on to hurt that had occurred over the years that had caused her to close her heart to her husband and now she’s feeding herself thoughts that are opening her heart and her feelings of love for her husband and him for her are being restored.

In other words, she’s stopping those negative jealousy ear worms that have been keeping her from love and connecting with her husband.

Does that mean that he (or any partner) can act inappropriately with others and Carol (or anyone) should just accept it and keep positive thoughts going, pretending what’s happening isn’t really happening?

Sometimes your jealousy is a signal that you need to address what’s happening that violates agreements that the two of you have in your relationship.

Sometimes your jealousy is a signal that you need to change your thinking.

Always, jealousy is a signal for you to stop, take a mental and emotional step out of your situation and get a clear view of where you want to go–and what your next